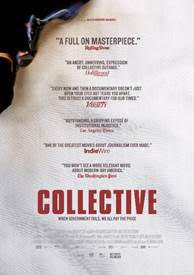 COLLECTIVE follows a heroic team of journalists as they uncover shocking, widespread corruption. After a deadly fire at a nightclub, the mysterious death of the owner of a powerful pharmaceutical firm, and the quiet resignation of a health minister—seemingly unrelated events, all within weeks of each other—the team of intrepid reporters exposes a much larger, much more explosive political scandal. COLLECTIVE is a fast-paced, real-time detective story about truth, accountability, and the value of an independent press in partisan times.